…you guessed right – I’m back with another post about the alternative venue called ‘Cultural Stables’ (Kulttuuritallit in Finnish)! 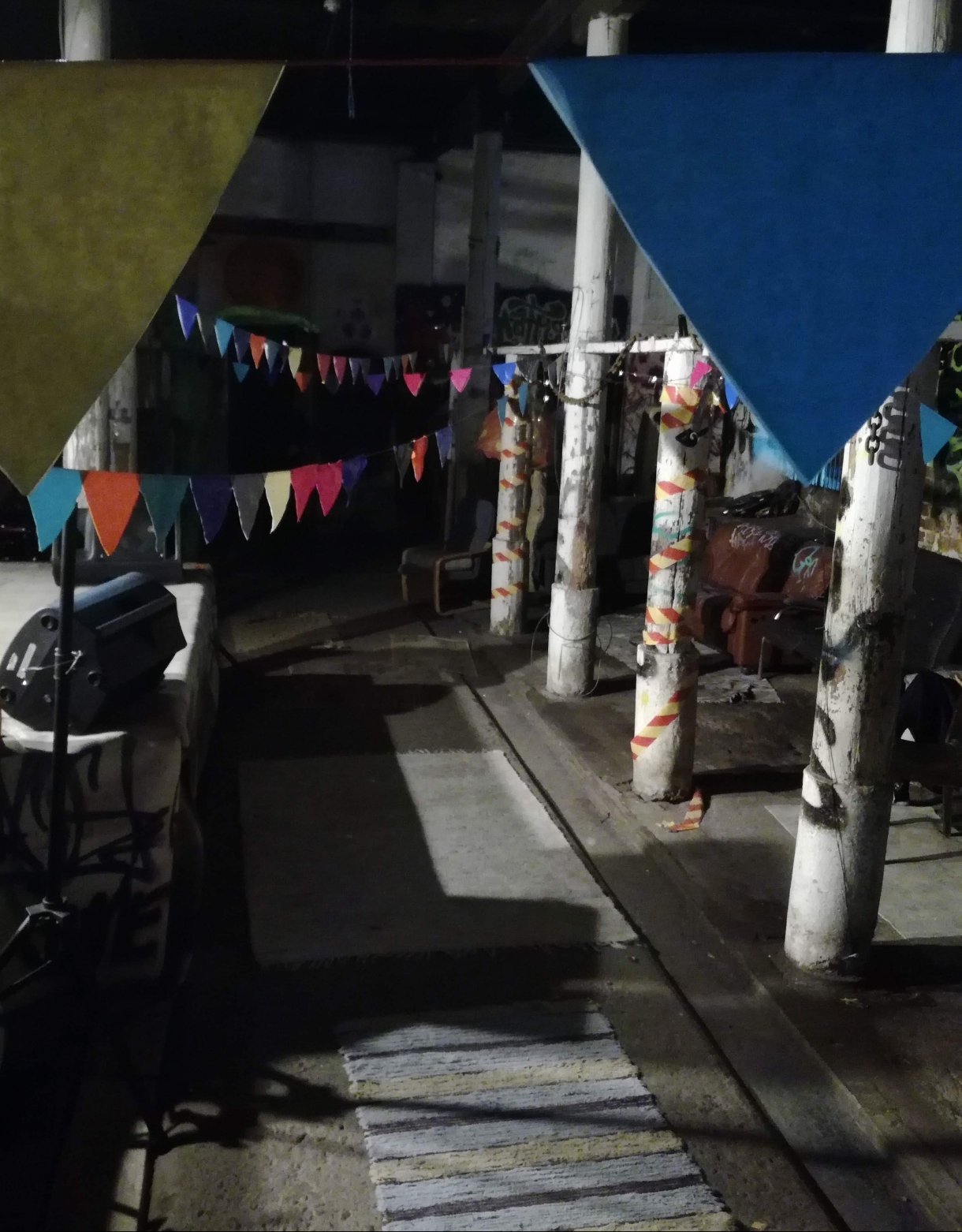 A little peek to the stage and dancing/hanging out area.

On the bottom left an old poster of photo exhibition the local animal rights group had for their 10th anniversary a couple of years ago. Also some big bulb fairy lights and re-used decorative stuff.

A close-up to the counter of the vegan cafe we had during the events. Free food for the musicians and affordable prices for everyone else! 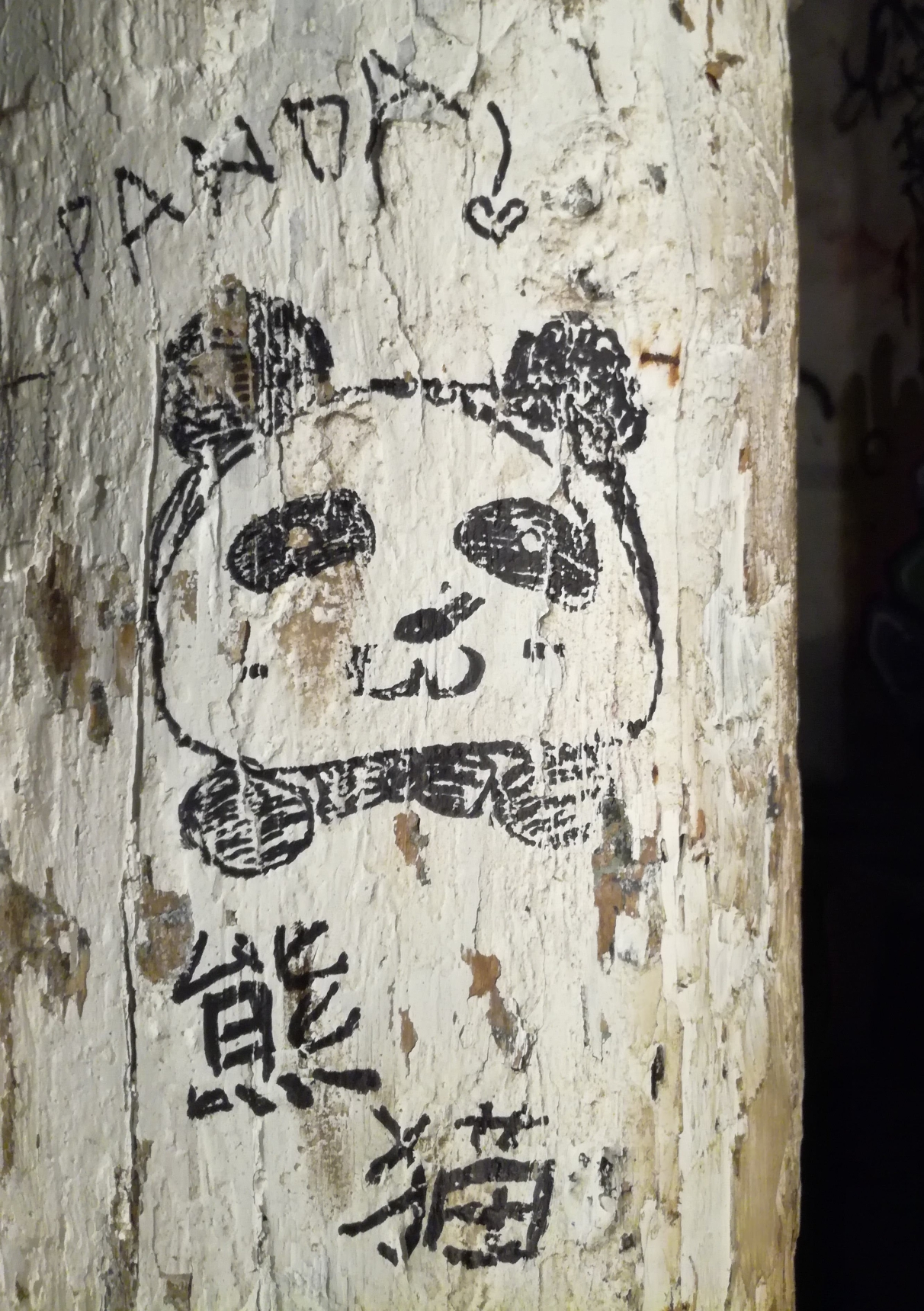 Can anyone translate the letters beneath the panda drawing?

This swing is kinda pushing the structures to their limits when in use but no one really cares. I guess, you only live once?

Smash fascism is kinda self-explanatory. Or if not, you should probably piss off from this blog to be honest. 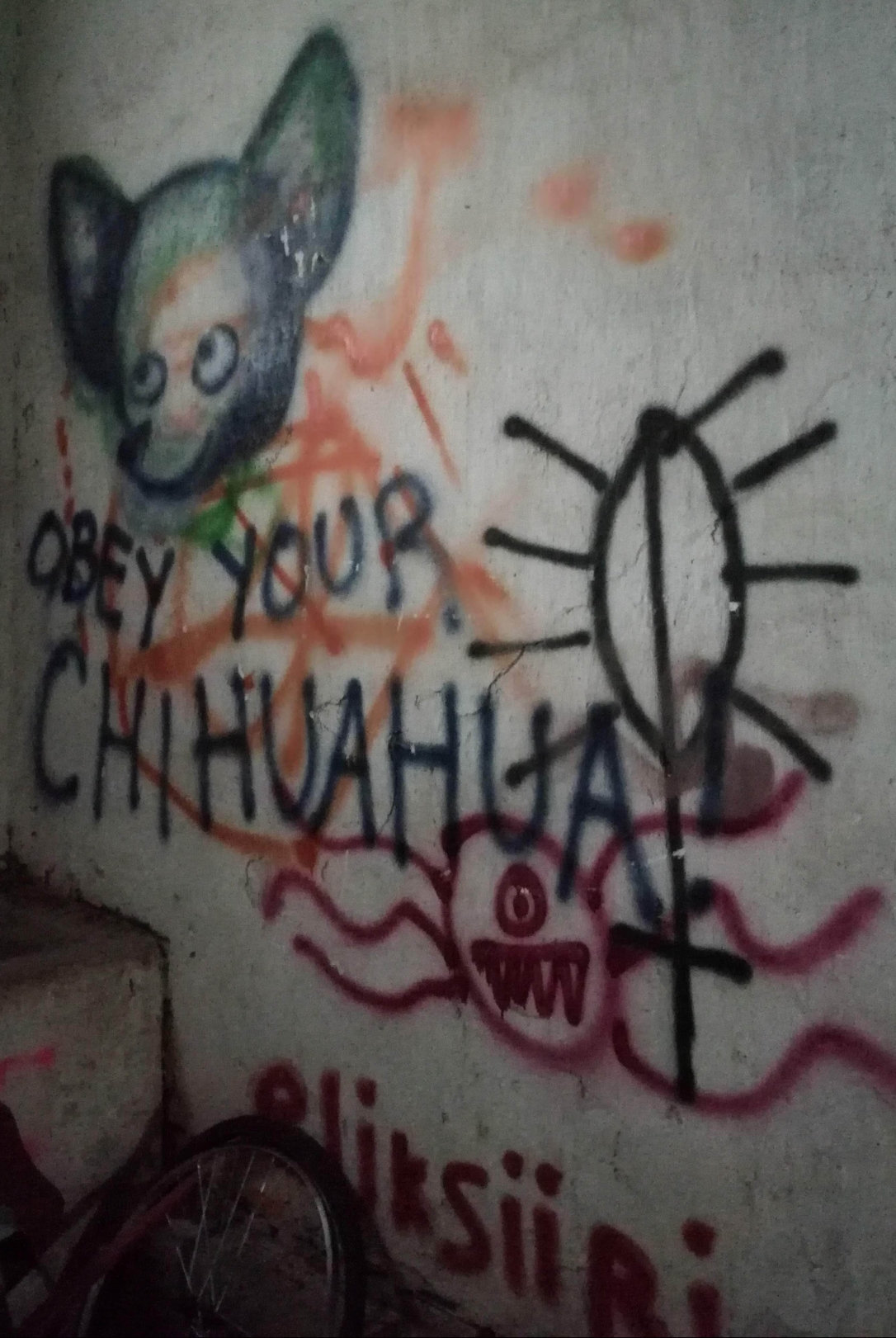 Symbol called ‘kirkkovene’ painted right next to a very on-point command. The word can refer to the kind of rowing boat used in rowing competitions – or a ‘vulgar’ drawing of vulva. I personally think (from a third-wave feminist perspective) that it can be used to reclaim the meaning of pussy from being a taboo to empower femininity.

The running red chilli painting above reminds me of the art made for the film ‘Across the Universe with the red juicy strawberry. 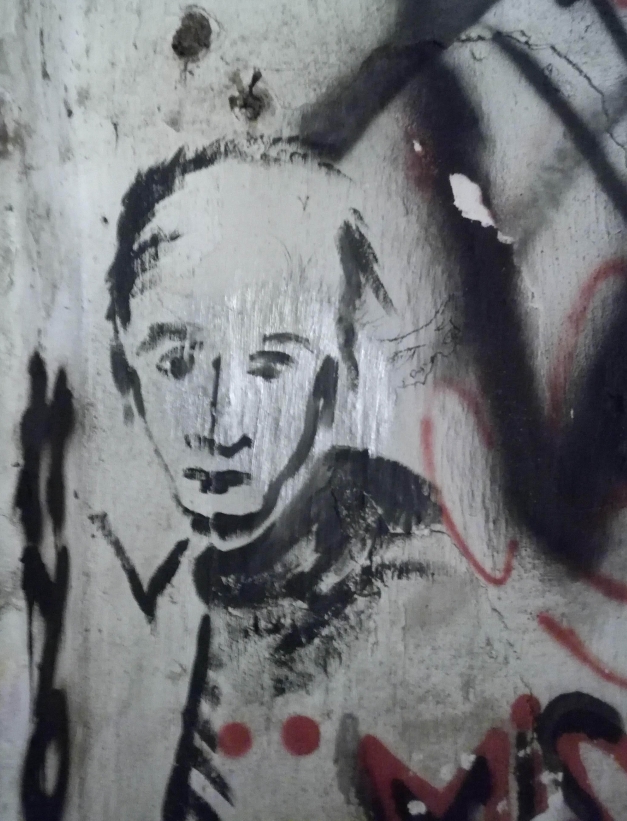 With ghostly face painted onto the cement wall I shall end this post!

Greetings for all of you beautiful free rainbow souls out there! 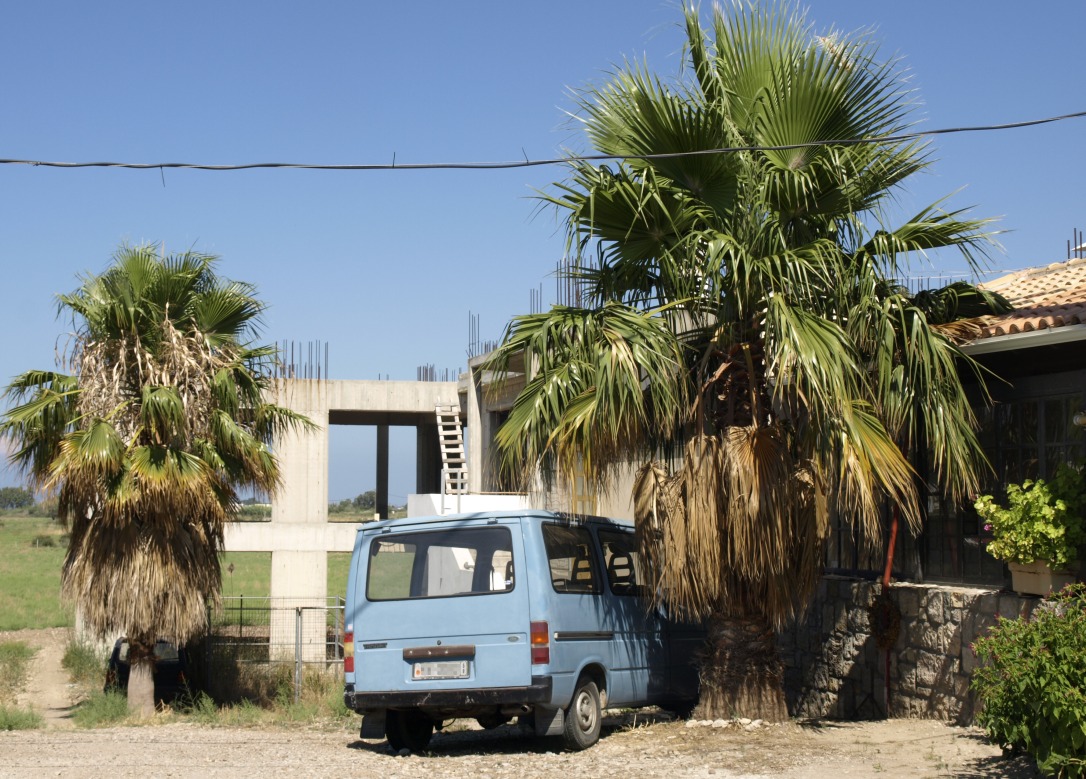 I am back again from Greece with finally some new posts about my travels! This is the first one in the ‘Kos series’ where I reveal my first (touristic) notions of the island and Greece in general. I hope you enjoy my upcoming content and let me know your comments and suggestions down below!

One of the first things I noticed was, of course, the official flag of Greece. I don’t know if it’s just because I’m Finnish and our flag and kind of ‘national colours’ are dark blue and white but I still argue that somehow the all-encompassing turquoise blue and white colour scheme made me culturally feel more relaxed than usual on my trips. Tell me I’m a nutter but I honestly believe that symbols such as flags and colours are able to transgress culturally constructed meanings.

The first thing that popped into my field of view after landing on the Kos International Airport ‘Hippocrates’ (of course its named after perhaps the most famous inhabitant that ever lived on the island) was the iconic white Orthodox Christian church with turquoise blue roof, just like the one above that was seen later on our road trip across the island. 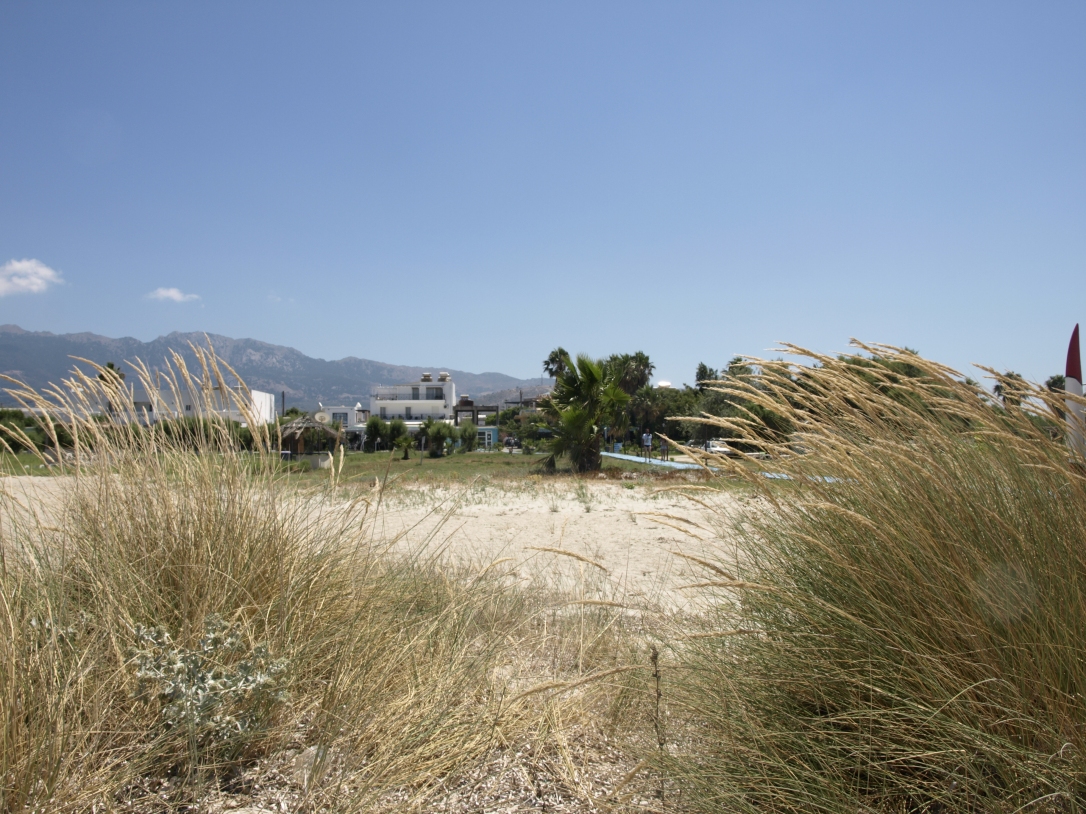 Another thing was the hot and dry terrain everywhere in the island (except maybe the centre of Kos town or the frequently watered tourist resorts). On the beach you could frequently feel on your skin the small pieces of sand flying in the wind.

And yes, pretty hot it was – even though one lady told us that the summer overall has been quite cold in Greece. Could be true since at the moment the weather is not much different in Helsinki, Finland!

Public telephones were apparently still widely in use and found all over Kos.

This old and rather rustic Nissan Vanette parked in Kefalos made me instantly dream about the most epic van tour across the Mediterranean countries… Maybe one day, guys! 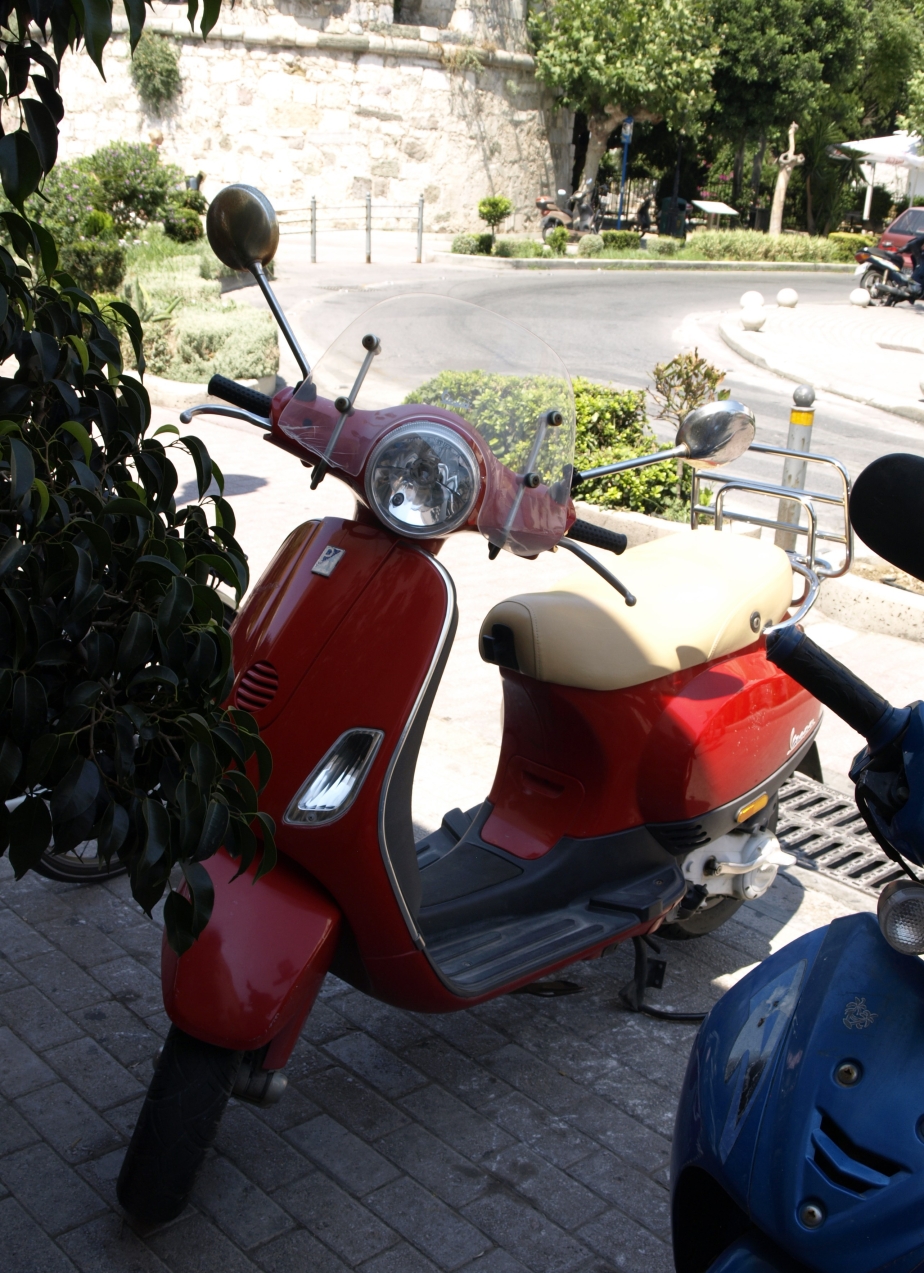 Driving with scooters (most often than not without any helmets on) was probably the most popular mean of transportation at least amongst the locals. It’s relatively cheap, fast and cool – so why not rent a vehicle of your own and enjoy a nice day exploring the island a bit further? 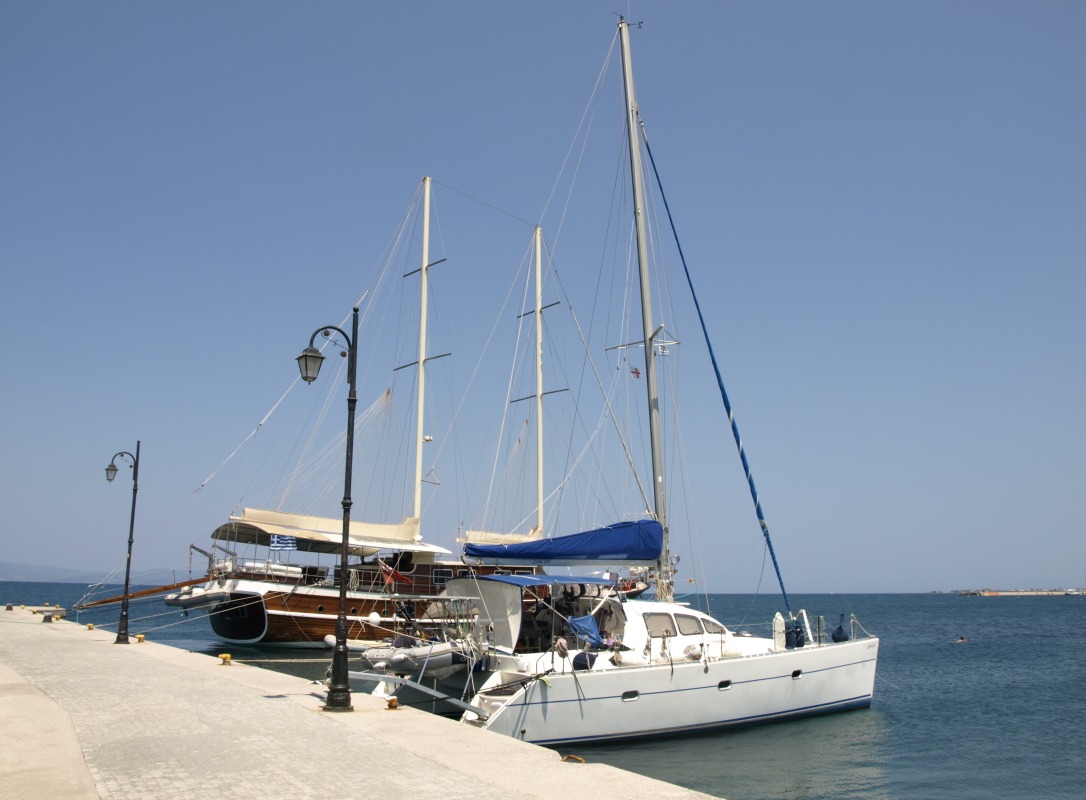 Of course, being an island after all, Kos was not only filled with beautiful beaches but also sailing boats of all kinds. 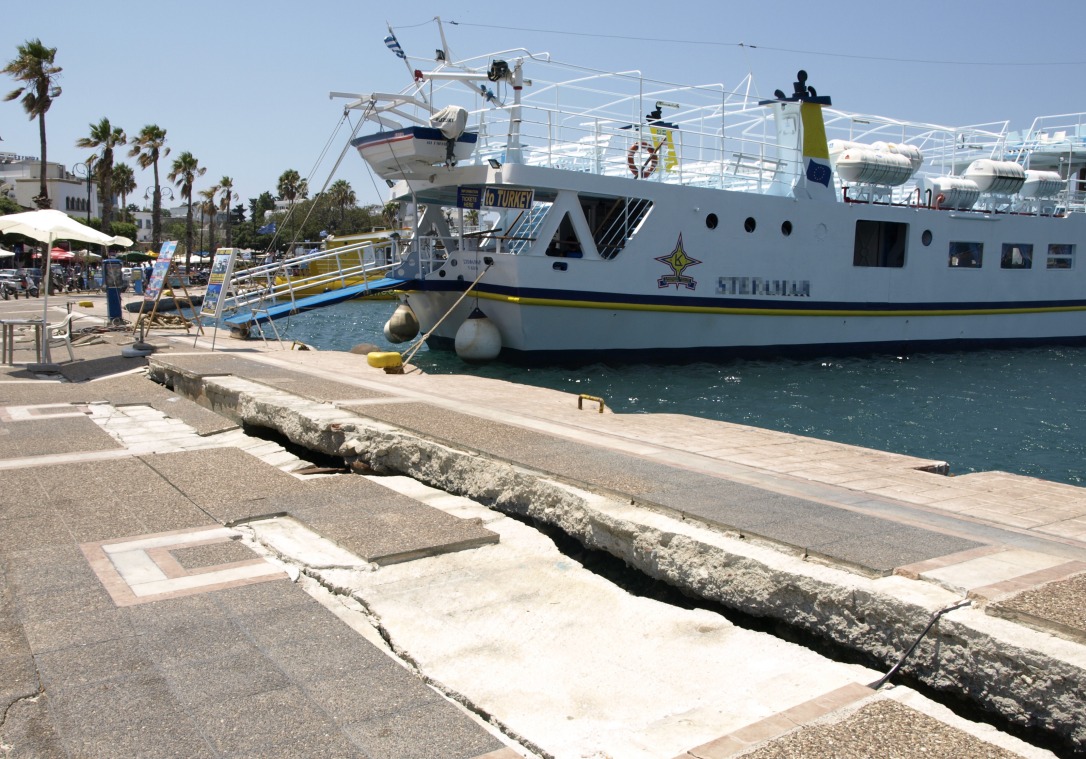 The cracks and splits in the pavement in the beach boulevard of Kos town remembered me about the Aegean Sea earthquake that happened almost a year ago – on July 2017. 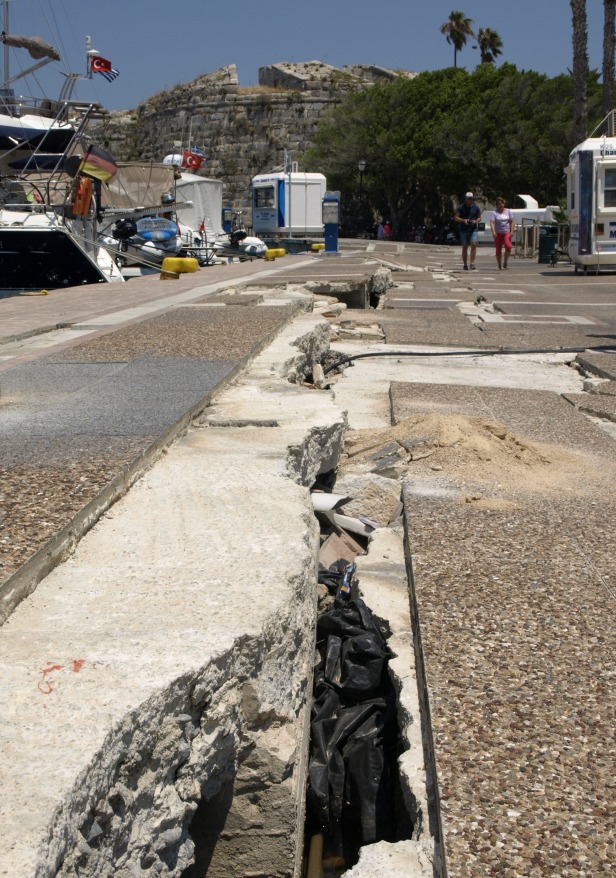 Some of the damages were still left unfixed after the 6.6 magnitude earthquake that sadly killed two and injured more than 120 people in Kos (and hundreds of more in Turkey).

But because my intention isn’t to scare but to encourage people to travel and see the world, I want to end this blog in more positive vibes. One of the things that you will definitely notice everywhere in Greece is the unique alphabet that has some features similar to Cyrillic letters that are widely used in Russian speaking countries. 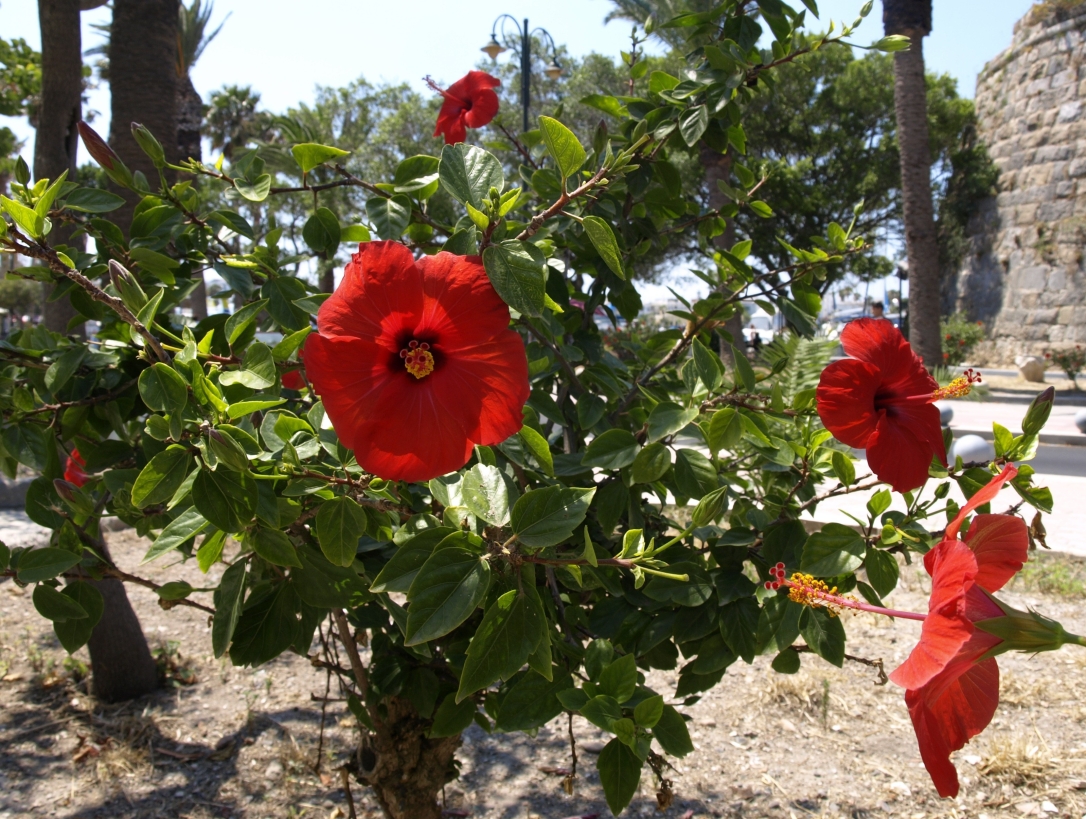 Because being a vegan I am all into plants (drum roll here, please!), I couldn’t help noticing how the beautiful hibiscus plant was literally everywhere! Apparently the generic name for the flower is derived from its Greek name ‘ἰβίσκος’ (hibiskos).

Not to say that there wouldn’t have been exotic plants pretty much everywhere in Kos!

On the next posts in the ‘Kos series’ I will introduce you to the stray animal situation, cuisine, shopping options, historical Agora, road tripping scene and more – so stay tuned, keep calm and enjoy the previous posts as well!

A small disclaimer in the beginning… This post was originally scheduled to be published right after my small adventure in my home town. If you haven’t read that, you can find it from here. However, as I ended up doing a small flaneur in Porvoo, the picture material just seemed to be too juicy not to be published immediately. Hence the Porvoo trilogy mixing up the timelines. (Any other science fiction fans out there?)

Anyway, the story goes like this: I decided, on a very spontaneous base as usual, to pay a visit to my home town’s independent music and event scene after I learned that there’s going to be some Russian punk performed! I’ve been volunteering in the venue before at the small vegan cafe corner but this time I was a bit more focused on photographing the event for you, guys. (Not to say that I would’ve in any way neglected the sacred coffee-making responsibilities.) I was even more astonished to hear that the band was actually from the same small Russian town I used to live as an exchange student for a while!

I also took some video footage that I sent to the band as well. Such a sweet Russian punk boys they were – even reusing each other’s plastic cutlery because they didn’t want to make any extra costs or waste! I also enjoyed the chance to practise my Russian even though my abilities kinda declined as I got more tired throughout the night. Sorry about that, guys…

Here’s also some video footage of the venue called ‘Kulttuuritallit’ (direct translation would be ‘Cultural Stables’). I think I will do a more in-depth post about the place and its rather significant history later… Anyway, I absolutely love love love the place with its free anarchistic community-oriented spirit!

Sorry for the inconvenient video files: I only took the raw material straight out of my phone so it is what it is. At least it gives you some perspective of the experience! What did you think about the post; would you be interested in visiting ‘Cultural Stables’ or even perform there yourself? We are welcoming all kinds of alternative bands (as long as you’re not a Neo-nazi of any sort). Please let me also know if you liked me to do more music posts about the upcoming events in ‘Cultural Stables’! It’s always a pleasure for me to visit there and help them out so you guys being interested would only give me a good reason to plan some more trips…

Continuing my Porvoo trilogy with a random collection of the cutest pics of indie-businesses located in the Old Town area (totally non-sponsored, though I wish I was).

Starting with some retro cars, naturally.

Jeez – just look at that pink gorgeousness. I could totally see myself honking for the tourists to step aside when I am making an important emergency cake delivery to the other side of the town.

Or the van above! Initially, as we were approaching it, I thought the van would’ve sold ice cream but now I’m not so sure no more. Anyway, isn’t it just cool in such a retro spirit?

Though the price level probably isn’t from the cheapest end, Porvoo does provide you with a variety of bed and breakfast or other hotel/motel options. Speaking from experience, I’d definitely say it’s worth the investment of getting to stay overnight in such an atmosphere! Who knows, maybe there’s even ghosts wandering around in those old rooms?

Out of all the museums I’ve personally visited in Porvoo, I’d definitely rank the doll and toy museum (that is actually more of a private collection) as number one. Even if you only have half a hour of so, you are able to see the full collection – and perhaps make even small purchases yourself!

Here’s a link to the museum’s official web page (only some parts translated in English): Porvoon nukke- ja lelumuseo 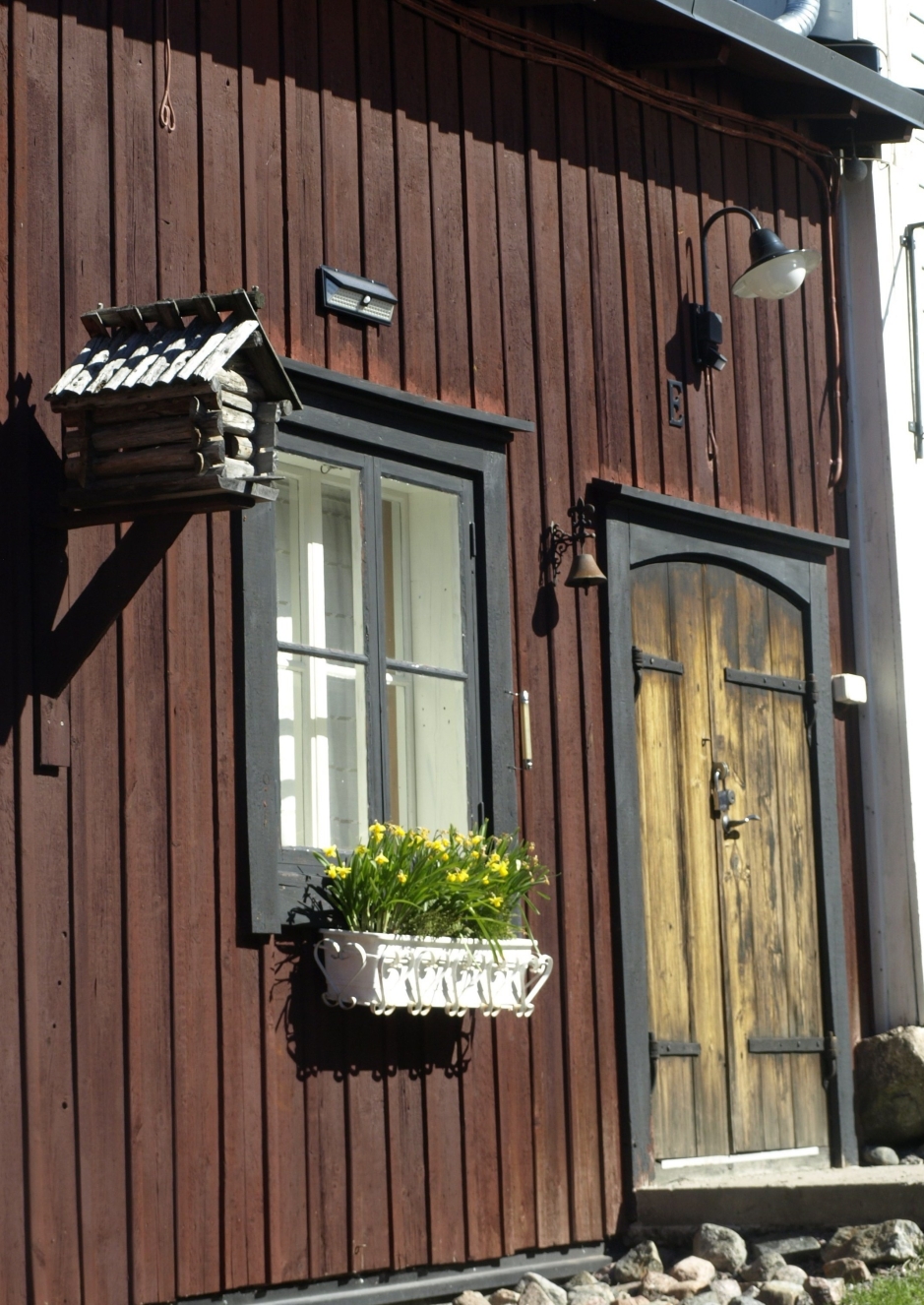 If you love second-hand, vintage and retro reproduction – Porvoo Old Town is your place. 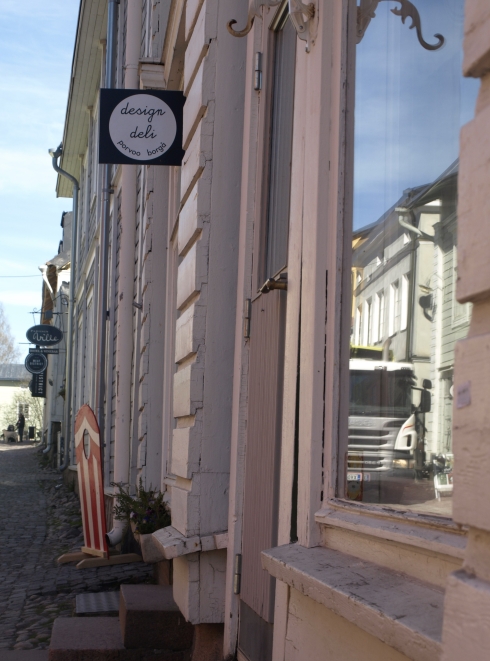 I’m pretty sure Porvoo is marked into maps (or apps) as an important design area as well – and for good reason! Personally, I’d much rather invest my money into vintage jewellery and furniture but each to their own, right? At least there is a good variety of locally produced handicraft and design products to purchase in Porvoo.

Sadly, a lot of the businesses were closed on Sunday, which is an unfortunate, but important part of the flaneur. I mean, we’re probably a bit too used to living in an overall capitalist culture based on quick, cheap and disposable consumption. If you appreciate a spontaneous adventure, then you gotta accept the fact that sometimes the coolest places just happen to be closed. Then you just have to come and visit some other time…

Even the paintings on the ordinary maintenance structures were promising for vintage and second-hand lover like me!

Brace yourself for the grade finale of my Porvoo series: tomorrow in my special post I am going to introduce you to the best cafe in the Old Town of Porvoo! Vegan options included, of course – so stay tuned, my lovely rainbow soul…